“Infinite growth of material consumption in a finite world is an impossibility.”    E. F. Schumacher 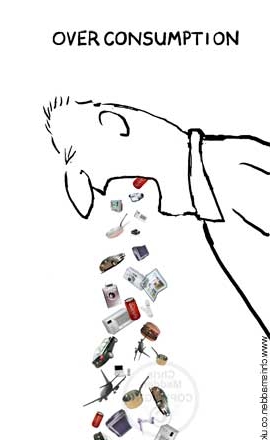 Consumption is a common concept in economics, and gives rise to derived concepts such as consumer debt.

Likewise, consumption can be measured by a variety of different metrics such as energy in energy economics. The total consumer spending in an economy is generally calculated using the consumption function, a metric devised by John Maynard Keynes, which simply takes the aggregate disposable income and multiplies it by a "marginal propensity to consume". This metric essentially defines consumption as the part of disposable income that does not go into savings. But disposable income in turn can be defined in a number of ways - e.g. to include borrowed funds or expenditures from savings.

Consumer theory is a theory of microeconomics that relates preferences to consumer demand curves. The link between personal preferences, consumption, and the demand curve is one of the most complex relations in economics. Implicitly, economists assume that anything purchased will be consumed, unless the purchase is for a productive activity.

Consumption is separated from production, logically, because two different consumers are involved. In the first case consumption is by the primary individual; in the second case, a producer might make something that he would not consume himself. Therefore, different motivations and abilities are involved.

The models that make up consumer theory are used to represent prospectively observable demand patterns for an individual buyer on the hypothesis of constrained optimization.

Prominent variables used to explain the rate at which the good is purchased (demanded) are the price per unit of that good, prices of related goods, and wealth of the consumer.

The fundamental theorem of demand states that the rate of consumption falls as the price of the good rises. This is called the substitution effect. As prices rise, consumers will substitute away from higher priced goods and services, choosing less costly alternatives. Subsequently, as the wealth of the individual rises, demand increases, shifting the demand curve higher at all rates of consumption. This is called the income effect. As wealth rises, consumers will substitute away from less costly inferior goods and services, choosing higher priced alternatives.

Cultures of Consumption was a 5 year, £5 million research programme that studied consumption in a global context. It ran from 2002 to 2007.

The research programme was jointly funded by the Economic and Social Research Council and Arts and Humanities Research Council, and brought together leading researchers from the social sciences and the arts and humanities.

For a short overview of research findings, click here: 4 1/2 Lessons about Consumption, by Professor Frank Trentmann

To go direct to details of and findings from the 26 research projects, click here: Projects

The paradox of thrift (or Paradox of Saving) is a paradox of economics propounded by John Maynard Keynes. The paradox states that if everyone saves more money during times of recession, then aggregate demand will fall and will in turn lower total savings in the population because of the decrease in consumption and economic growth.

Over-consumption is a theory related to overpopulation, referring to situations where per capita consumption is so high that even in spite of a moderate population density, sustainability is not achieved. The theory was coined to augment the discussion of overpopulation, which reflects issues of carrying capacity without taking into account per capita consumption, by which developing nations are evaluated to consume more than their land can support. Green parties and the ecology movement often argue that consumption per person, or ecological footprint, is typically lower in poor than in rich nations.

A. One good method to learn how to trade, especially forex, is to use binary options, an increasingly popular type of global trading tool. This popularity comes with the ease to trade with a simple “yes” or “no” on whether a market will be up or down within an expiration time that will be usually between five and 30 minutes. But due to high market growth brokers multiplied, therefore choosing the right binary options platform is paramount. Be aware of those firms licensed offshore and falling outside the strict standards and regulatory framework provided by United States, Europe and Australia Governments.


B. In times of recession, the automotive sector is one of the first to be hit and it’s difficult to see how and when it will recover. But 2 main contrasting factors strongly emerged during last recession and are worth a mention:

1. There had been a considerable raise in second hand cars sales in most of the world. This fact had mainly 2 reasons. On the demand side the current financial crisis had pushed many people toward used motor cars due to budget constraints. On the supply side, the rising fuel prices had also boosted second hand cars sales, as many people opted to sell off the fuel guzzlers they had bought earlier when fuel cost was not a major issue.

2. Since the problem is that people don’t have enough money to buy cars upfront, it had been registered an increase of the offer of car leasing or contract hire deals where customers lease their car on a monthly basis until the cost has been paid off. The availability of these deals means that buyers have more choice and they can focus on a car that would normally be out of their price range, which means more money for the car manufacturers in the long run. This kind of contract offers to the consumer not only a wider choice of more desirable cars, but also a payment in manageable instalments and often a plenty of other benefits like servicing costs and road tax ... and finally a hassle-free life for customers.

Latest From The Blog